The Advanced Stories Authoring And Presentation System, or ASAPS, originated from the Advanced Stories Group (ASG) at Georgia Tech, which was founded by PhD student Hartmut Koenitz in 2005 and supervised by Dr. Janet Murray. The goal of the ASG was to extend the practice and understanding of interactive storytelling by creating a formal structure for describing and authoring interactive stories, and to create exemplary stories that illustrate the expressive possibilities of the form. In creating ASAPS, Dr. Koenitz asserts that interactive stories are a new format of expression, that shares some of the characteristics of existing story formats and some of the characteristics of computer games, but has its own affordances and its own potential for capturing human experience.

The program that creates these interactive stories, the Advanced Story Builder (ASB), is an easy-to-use toolset which allows authors to quickly create interactive experiences such as games, interactive narratives, or training exercises. It can also be used as a rapid prototyping tool for projects that require more elaborate features. The program requires no coding, operates on both Mac and Windows, and works with regular graphics, animation, sound, and video file formats. The story files created in ASB are written in an XML-based markup language (ASML), which can then be played via an ASMLEngine that operates in Flash. 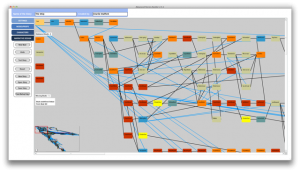 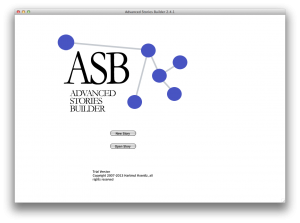 To create a story, authors combine “beats”, or atomic narrative units, to create a complete interactive experience. The 14 different beat types include static elements like a title screen, as well as flexible elements, which contain choices in a conversation, for navigation, or for adding items to an inventory. Finally, procedural beats allow authors to manipulate counters, global variables, inventory items, and timers. This inventory of elements, together with audiovisual assets, allow for a wide range of visual styles, such as film-noir, horror, superhero comic, and fantasy.

ASAPS is an ongoing research project. An iOS playback engine is currently in late stage development.